Portumna Castle is a large semi-fortified Jacobean house, built by Richard Burke, 4th Earl of Clanricarde and his wife Frances Walsingham, the Countess of Essex some time before 1618. It has been described by Bence-Jones as ‘probably the finest and most sophisticated house of its period in Ireland’. 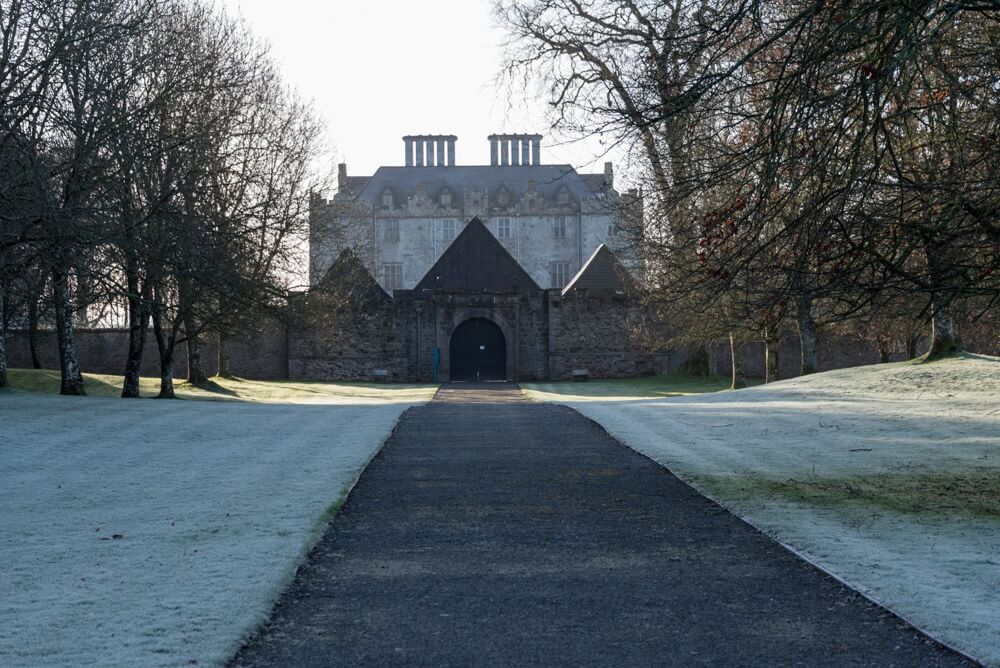 Richard Burke spent £10,000 on building Portumna Castle, and when it was completed it was unequalled in Ireland for elegance, style and grandeur, outshining other castles. The design is unique because it represents a transition between the fortified tower house and the country mansion, which was already popular in England.

At the time of its construction it was without equal in Ireland in style, grandeur and distinction. Consisting of three storeys built over a basement with four flanking towers, the seven-bay rectangular building places less emphasis on defensive features such as the narrow slit-like windows of the traditional towerhouse.

However, a machicolation over the main entrance door, musket loops in the flanking towers and strong enclosing bawn walls on the north and south sides of the house are fortifying features represented in earlier periods of house-building.

It was built as part of an extensive programme of works to consolidate the Earl’s claims to the Lordship of Connacht.

The castle is a symmetrical three-storey mansion built over a basement; two rooms deep linked by a central gallery with ornamental gables, carved doorcase and large windows. It was built for comfort and beauty with a wonderful view of Lough Derg, yet it has some defensive features including square corner towers and gun loops to protect the entrance.

The castle was accidentally destroyed by fire in 1826 when the entire contents were destroyed. The family moved to the courtyard buildings which were converted into a temporary residence. This is known as the ‘Dowager House’ and is situated near the Priory. 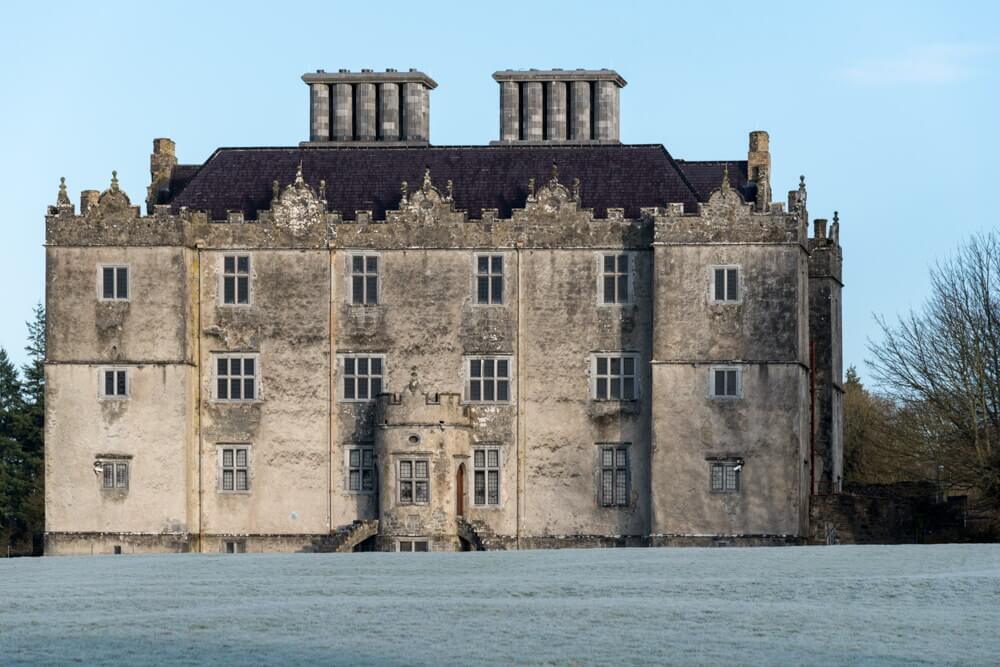 Dúchas – the Heritage Service has carried out conservation and restoration work on Portumna Castle and Gardens.

The kitchen garden to the northeast has been recently restored. Portumna castle is a national monument and it is open to the public from March to October, 10am to 6pm daily. It is situated close to the Marina and Portumna Forest Park.

A new Gothic mansion was built in 1862, at the opposite end of the Portumna Demesne. Designed by the architect, Sir Thomas Newenham Deane, it was two-storeys with a high pitched roof and an attic of steep gables and dormer-gables. There were small towers with pointed roofs and elaborate windows.

This ‘new castle’ was rarely lived in. The last Marquis of Clanricarde, who succeeded in 1874, was a notorious miser and eccentric who dressed like a tramp and spent his life in London. He died in 1916, leaving Portumna Castle and estate to his great-nephew Henry, Viscount Lascelles, afterwards 6th Earl of Harewood and husband of Princess Mary.

In 1917, Henry Lascelles had plans prepared for the restoration of the old castle at Portumna. These were never carried out however. The new mansion was destroyed by fire in June 1921.

Princess Mary, Princess Royal and Countess of Harewood (Victoria Alexandra Alice Mary; 25 April 1897 – 28 March 1965), she was the third child and only daughter of King George V and Queen Mary. She was the sixth holder of the title of Princess Royal. Mary held the title of princess with the style Highness from birth as the then great-granddaughter of the British sovereign, and later Her Royal Highness, as the granddaughter and finally daughter of the Sovereign, visited Portumna in 1928; the first time a member of the British Royal Family to come to Ireland after Independence. Later, Portumna demesne was sold, after Lord Harewood’s death in 1947. The Forestry Commission acquired the estate and it is now a Forest Park. 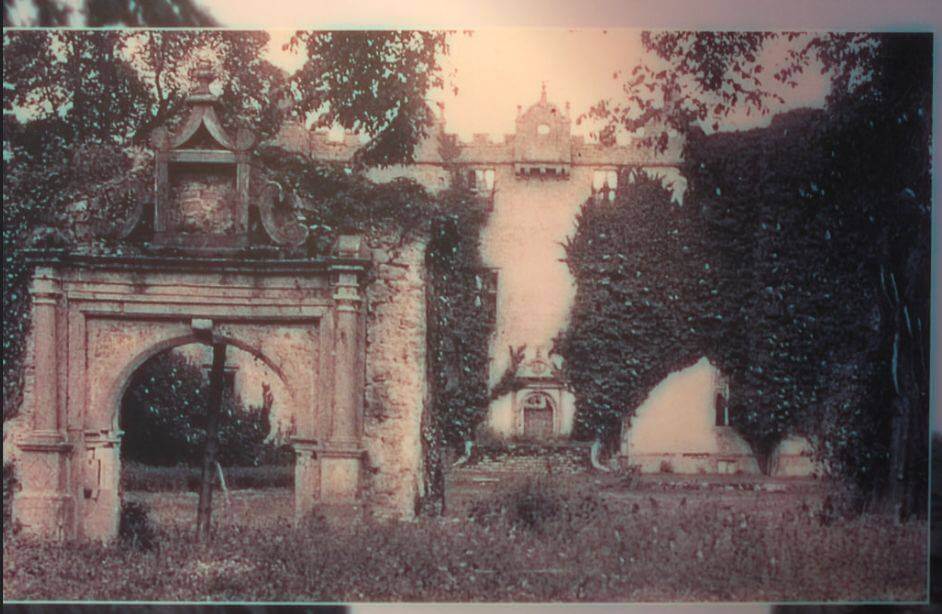 Nothing remains today of the New Castle only the view to the lake from its site (now the carpark in the Forest Park). Cut stone from the ruin was used to build the new Church at Portumna, which began in 1958 and was completed in 1961.

Portumna Castle prior to renovations in the early 1900's to what it is today a magnificent example of a Renaissance style manor house. Worth a visit to see the beautiful restoration work on the building itself and the wonderful colourful gardens.

Portumna Castle has been studied by art historians and architects alike due its innovative design that was influenced by trends originating from Britain and the Continent. However, when it came to the conservation and restoration of the castle and its grounds in the early 1970s there were questions that remained unanswered. Small-scale archaeological excavations at Portumna were carried out over a period spanning almost three decades associated with the restoration programme of the castle. The results of the excavations have revealed fascinating insights into various aspects of the castle’s architecture, drainage, surrounding gardens, and early driveways.

Constructed in the early part of the seventeenth century, the castle comprised a symmetrical, seven-bay, three-storey building (c. 29m by 21m), with a basement and attached square corner towers. Stylised battlements and small curved gables with pedestals and balls adorned the roof line of the castle. The design of Portumna represented a transitional structure between fortified castle and the typical larger house of the eighteenth century, retaining elements of defence such as firing holes and bawn walls, but essentially forming a domestic residence. These types of transitional structure developed in Ireland between the end of the 16th century and the beginning of the seventeenth century (Leask 1999).

Amendments and additions to the castle’s interior were periodic and often reflected this changing functional dynamic. By the publication of Burke’s nineteenth-century guide to Country Houses Volume 1, Portumna Castle was regarded as probably the finest and most sophisticated house of this period in Ireland (Bence Jones 1978). However, it was just after one phase of considerable renovations in the 1820s that the castle was unfortunately destroyed by an accidental fire and never rebuilt. Instead, the Clanricarde family adapted recently constructed stables and out-buildings, located to the east of the nearby Dominican Priory, as their residence.

The imposing façade of the castle faces north and is approached by a long avenue and formal gardens. The dramatic approach has three formal enclosures which contain geometric and regular plantings, an old shrub rose garden and a walled kitchen garden, all combining to re-create a sense of the original 17th century setting.

The ground floor of the castle is open to the public and houses an exhibition on the history and restoration of the building and the de Burgo family. The virtual reality DVD presentation adds to the exhibition, bringing the story to life.