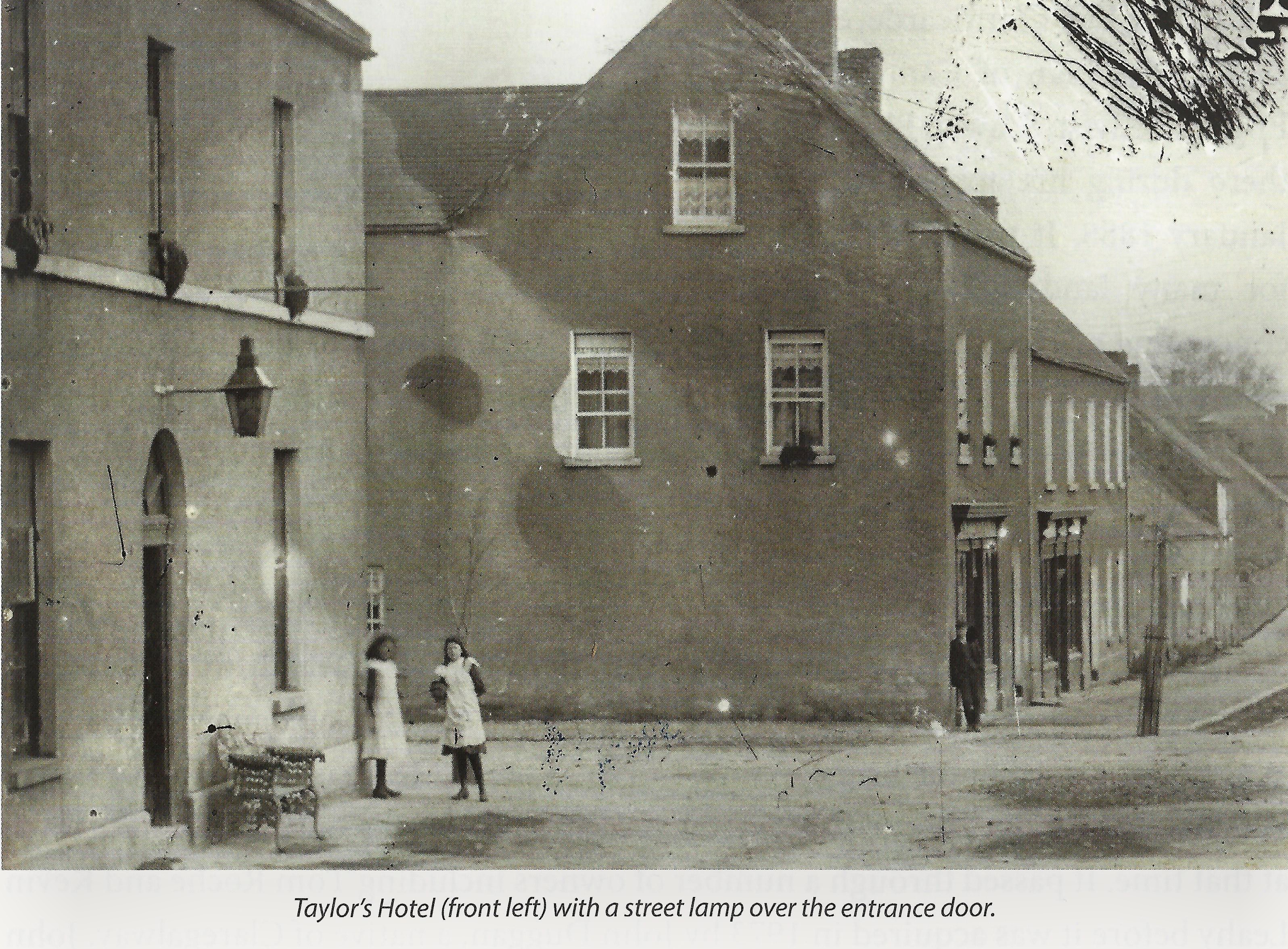 Located at the junction of Brigid’s Road and Clonfert Avenue, this landmark building came into existence as the ‘Clanricarde Arms Hotel.’ as part of a development when New Street was laid out in the 1830s. The hotel was later taken by the Taylor family who ran it successfully until it was bought by the National Bank in 1922. The premises are now owned by Bank of Ireland.

Clients of the hotel had their coaches looked after and their horses were stabled in the hotels outhouses. 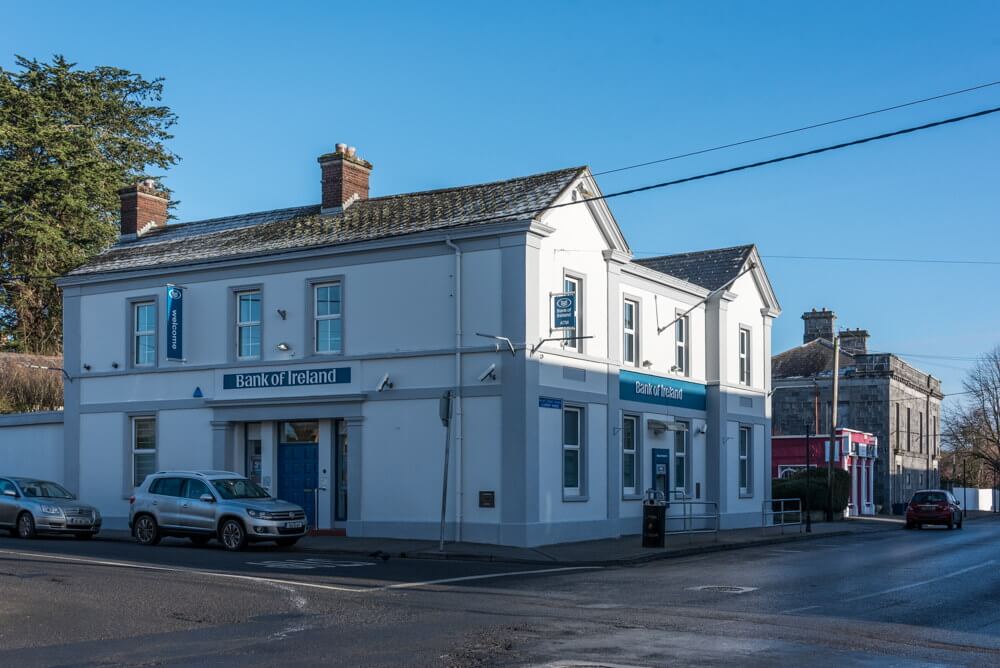 12,000 and more take the pledge in Portumna on one day in March 1840, THE REV. MR. MATHEW, IN PORTUMNA administered the pledge to about twelve thousand persons. The teetotallers of Portumna, who, he said, were a credit, the multitude having given three cheers for the Apostle of Temperance, retired highly delighted with the proceedings of the day, not a single accident occurred in so dense a crowd, many afterwards received the pledge at Taylor Hotel (now the Bank of Ireland building). 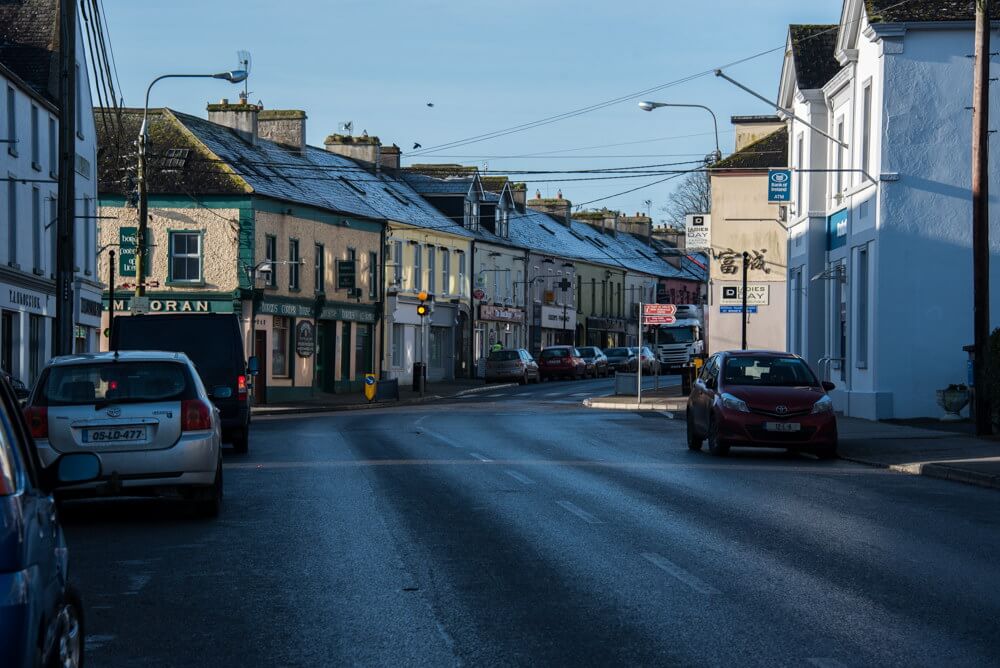 THE REV. MR. MATHEW, IN PORTUMNA (From a Correspondent)

On Patrick's day, the anniversary of our patron saint, the town of Portumna exhibited a display of heartfelt joy and public amusement of which the like was never witnessed before, in consequence of the deathsblow given to intemperance.

At four in the morning, the amateur band of the town marched at the head of six hundred teetotallers, enlivening the inhabitants with national and patriotic tunes, and in the course of the day the gentry and peasantry of the surrounding country particularly Tipperary, collected in numbers to be an eye witness of and share in the very imposing spectacle.

The band, which is composed of a very respectable portion of townsmen, were dressed uniformly in white vests and trousers, ribbons and shamrocks and played in their usual admirable style. The teetotallers marched four deep, all bearing white wands and wearing green ribbons and medals, the strictest attention to decency and good order was obsreved by the assembled thousands, and the flow of soul and excess of joy was kept up until evening, when all returned to their homes to drown their shamrocks in cups that cheer but don't inebriate, "joy beaming in each countenance, amidst the hearty welcome home" from their parents and freinds-what a flow of gratification must this miraculous change in the state of society afford to our friends, and the heaven sent a just Apostle of Temperance in room of hell born drunkenness, riot and disorder.

On Thursday, the 19th, the Very Rev., Mr. Mathew being in Loughrea, on his return from Galway, a rumour of his visit reached Portumna, when the bandsmen, attentive to the call of patriotism, mirth and morality, met at an early hour on the green, beautifully drest in green and white, about twenty thousand of the gentry and peasantry congregated to express their warm affection for Father Mathew, and receive the pledge-the meeting was clean and orderly, and reflects much credit on the taste and respectability of the inhabitants of the handsome town of Portumna-nothing could exceed the humour that prevailed until evening, when an account reached town of the unavoidable delay of his reverence at Loughrea, in consequence of the dense number of postulants. The meeting separated well pleased with the amusement afforded by the band and members of the society, the smile in each countenance indicated the intention of the eager eye expectants not to let Father Mathew's belssing escape them, and to come to town from day to day until he would arrive. Next morning the appearance of the town exceeded that of the past day until up to 12 o'clock, when his reverence arrived from Loughrea, having been stopt on teh way at Gurtymadden, Ramore, (the seat of James M'DERMOTT, Esq., J.P.), and Killimore, in which three places he administered the pledge to some thousands. The rev. gentleman was accompanied by Ambrose O'KELLY, Esq., Fairfield, J.P., James M'DERMOTT, Esq. Ramore, J.P., Thomas RYAN, Esq. Renville, Rev. Thomas RYAN, P.P., Rev. Thomas COEN, C.C., Rev. Mr .BERMINGHAM, P.P. Borrisakane, Rev. Mr. FAHY, P.P. Tynagh, and several other gentlemen.

On the shout of the arrival of the rev. pastor being given, about a thousand teetotallers formed a ring, which was kept up in a most orderly manner in the green, all wearing green ribbons and medals, and the band playing in the centre in beautiful style, see the conquering hero comes; the carriage which conveyed his reverence entered the ring when, having expressed his heartfelt thanks and admiration at the cordiality of his arrival, and splendid appearance of so interesting a multitude, rendered more lovely by the glorious sunshine which beamed in superlative brilliancy, he proceeded with the procession to the farmyard of the Marquess of Clanricarde, where having ascended the platform, made for the occasion and having spoken in energetic terms, on teh solemnity of the sacred pledge, and the manifold vices ever attendant on intemperance-he administered the pledge to about twelve thousand persons, after giving his blessing he moved with the procession to Taylors hotel, the band playing at the door "God Save the Queen," from the window he addressed the meeting in terms of high gratification at his affectionate reception, he then returned thanks to Captain BINDON, R.N. Sub-Inspector, and his very proper men who gave such assistance in the preservation of order-also to the band, who, he said, played exquisitely, and to the teetotallers of Portumna, who, he said, were a credit to him, the multitude having given three cheers for the Apostle of Temperance, retired highly delighted with the proceedings of the day, not a single accident occurred in so dense a crowd, many afterwards received the pledge at the hotel, when the rev. gentleman left town in company with the Rev. Mr. BERMINGHAM, P.P., Borrisokane. The band and members of the Portumna society marching with him to the bridge which divides the county, where, with a warm shake hands, he bade a farewell, and promised to visit their well-regulated town and society in a short time, his unavoidable hurry prevented the rev. gentleman from accepting any of the many invitations which he was solicited, members of the police and military took the pledge. 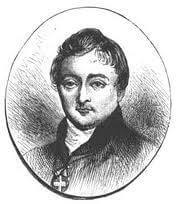