In July 1890 the Dublin architect, William H. Byrne, advertised for competent builders to construct a new convent and chapel at Portumna, the foundation stone for which was laid by Bishop Healy in June 1891.

In February 1892 Byrne sought tenders for the building of a convent school in Portumna to accommodate 200 pupils. The edifice was to become one of the finest examples of cut stone masonry and carpentry workmanship in the area.

The school opened on 14th September 1893 to cater for educational needs of the girls and infant boys. 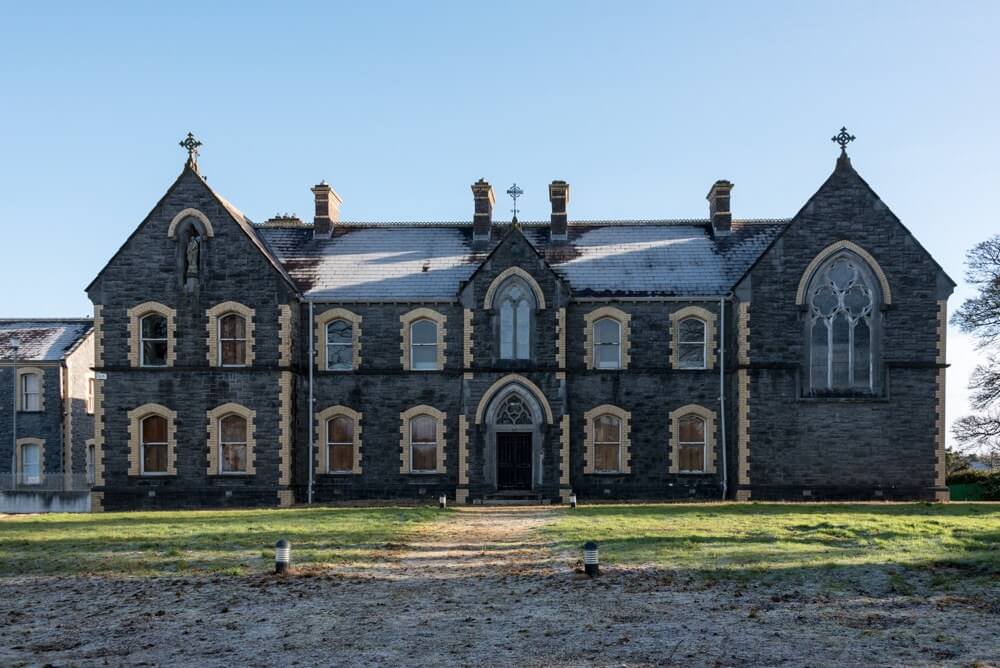 In 1890s Sr Pelly began the building of a residential technical school, with boarding accommodation for twenty girls, on the Mercy Convent grounds The Portumna, contractor, John Martin built the school at a cost of £2,000. It received an annual grant of £140, coming partly from the Portumna Board of Guardians rates and partly from the Science and Arts Department, South Kensington, London. The school opened in 1898 and became known as the St Mary’s Rural Domestic Economy School. The girls, all from a rural background who intended to live on the land, were taught skills in cookery, dairy management, poultry-keeping, gardening, household management, laundry work and needlework. Instrumental music was also taught there. The school had three principal objectives: (i) The training of farmers’ daughters and other girls in improved modes of dairying and general household management; (ii) The training of domestic servants and; (iii) The special instruction of girls about to become technical instruction teachers.

In the Convent of Mercy grounds is located what is believed to be part of a motte and bailey, representing the first Norman settlement in Portumna. The Convent of Mercy, Portumna, a daughter house of Loughrea, was founded in 1882 and opened a residential Domestic Science School for girls in 1898. The founding manager was Sr. Mary Joseph Pelly. The convent may have run the school for some years prior to this as the third report of the County Committee mentions that the school was funded by the Board of Guardians (Portumna Union) and had been in operation for many years.

Under the 1891 Act Boards of Guardians were empowered to make grants available for agricultural education and training. The school was established to give “instruction in the science and practice of Cookery, Laundry Work, Dairy Management, Poultry Management, General Housework, Domestic Economy, and Needlework.

The admission requirements for prospective students were as follows:

Pupils had to be sixteen years of age or older.

Applications for admission had to be signed by a “responsible person” who was well acquainted with the prospective pupil.

Pupils had to be able to read, write “with a fair hand”, spell with tolerable correctness, and have a knowledge of the basic rules of Arithmetic.

As pupils had to take part in all the work of the school and household they were required to supply serviceable dresses and aprons of plain washing material. In addition they were required to bring one good outdoor dress, hat and jacket, a pair of towels, house shoes, hair brush and comb, tooth brush, and clothes brush.

Whilst people might smile at the clothing requirements it should be remembered that it was always expensive to kit out children for boarding school.

Pupils from outside the Portumna Rural Union area had to be selected by either their Local Authority(Union) or Committee and submitted to the County Committee for Technical Instruction for final approval.

At the end of term (one year’s training) an examination was held under the auspices of The Department of Agriculture and Technical Instruction for Ireland. Prizes were awarded for best exam results, neat-ness, and best notebook. A second terms training could be supplied if required.

Non resident pupils were admitted at a fee of ten shillings (€0.58) per quarter. 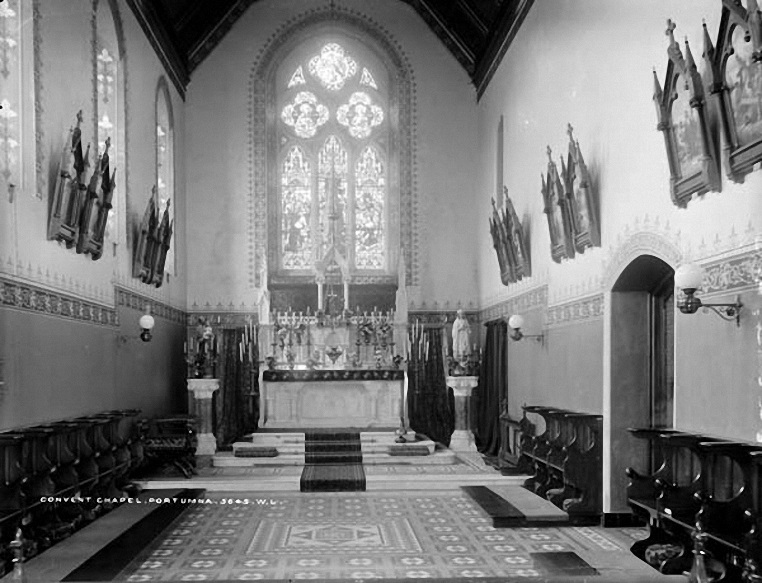 Pupils had to show an aptitude for the work of the school and if they failed to do so within two months they were to be sent home.

On completion of training pupils, who earned it, would receive a certificate of merit relating to their conduct and exam results.

The timetable makes it abundantly clear that there was little time for distractions. The day began with a 6.00am rise, with a half an hour for dressing and prayers. From 6.30 to 7.30 pupils were allocated various tasks such as milking cows, work in the laundry, dairy, poultry yard, or kitchen and household duties. At 7.30am they had breakfast, following which they made up their beds, cleaned their dormitory and changed into their uniforms for the day.

The subjects taught were Cooking and Domestic Economy, Needlework, Dairying, Laundry and General Housekeeping, as well as Reading, Writing, Arithmetic and Geography.

The courses were designed to be practical.

During the year 1901/1902 there were eighteen resident pupils in the school. There was also a class for day pupils which dealt with Cookery and General Housekeeping. The boarders were in receipt of County Scholarships. During the first year of the scheme,(1901/1902) these were valued at £7 per annum. In the second year of the scheme the scholarships were increased to £15 per annum.

In 1902 the Department of Agriculture and Technical Instruction’s Inspector reported that the school was the best of its type to come under his notice, As a result of his report the Department requested a set of six full plate photographs showing the various sections of the school at work. The photographs were to form part of the Department’s exhibit at the upcoming Cork Industrial Exhibition. It would seem that Portumna was to be used to set the national standard for excellence.

In 1905 the Department took over the financing of the school and augmented the courses offered. By this means the school was established as a model school similar to The Munster Institute in Cork.

North façade is seven-bay and two-storey over half-basement, with stepped profile central entrance breakfront having openings at half levels and belfry over, and further entrance at north end. Currently not in use.

Tudor-arch doorway to north end of north façade, with yellow-brick surround and voussoirs and timber door, accessed by metal stairs over area, and square-headed doorway to north breakfront with double-leaf timber panelled door, having limestone panelled plaque over, and accessed by metal stairs over area. Set back from road in extensive grounds with roughcast rendered boundary wall having limestone copings, and ashlar limestone piers with plinths, gabled tops with lucarne details to sides, trefoil details to front, and decorative cast-iron railings and gates. 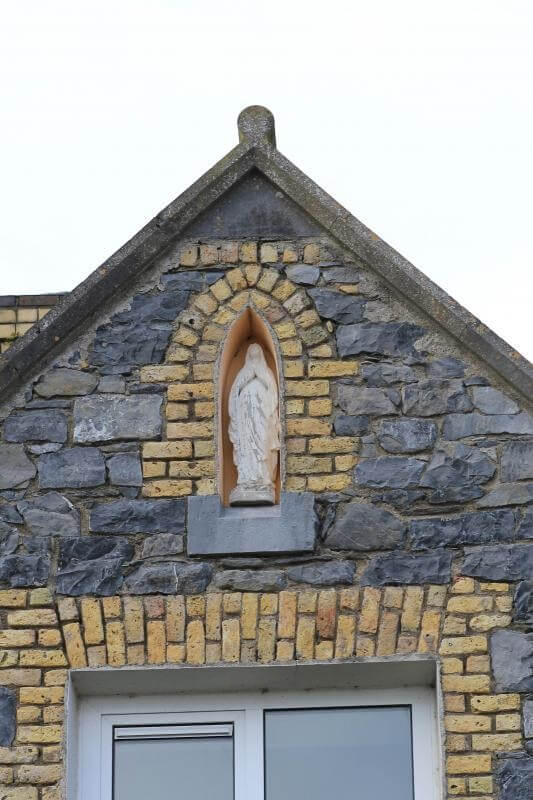 An imposing late nineteenth-century convent with Gothic Revival influences retaining its architectural character and much of its original fabric. As with the neighbouring school building it is institutional in character but the façade is enlivened by the yellow brick detailing and varied window openings, and the canopied statue niche. Though no longer in use, it played an important part in the social and educational history of Portumna. It forms part of an important group of buildings with the adjoining chapel and the neighbouring school building.

This late nineteenth-century school retains its architectural character and much of its original fabric. As with the neighbouring convent and chapel it is institutional in character but the façade is enlivened by yelow brick detailing and modest entrance porch. Though no longer in use the building played an important part in the educational history of Portumna. Significant as a stand alone structure, it also forms part of an important group of buildings with the neighbouring convent and chapel.

A garden feature enhancing the setting of the neighbouring convent and chapel. While it is not depicted on Ordnance Survey maps until after the construction of the convent, local folklore suggests it may have been a Norman motte, although archaeological excavations in 2005 did not reveal any archaeological material associated it.