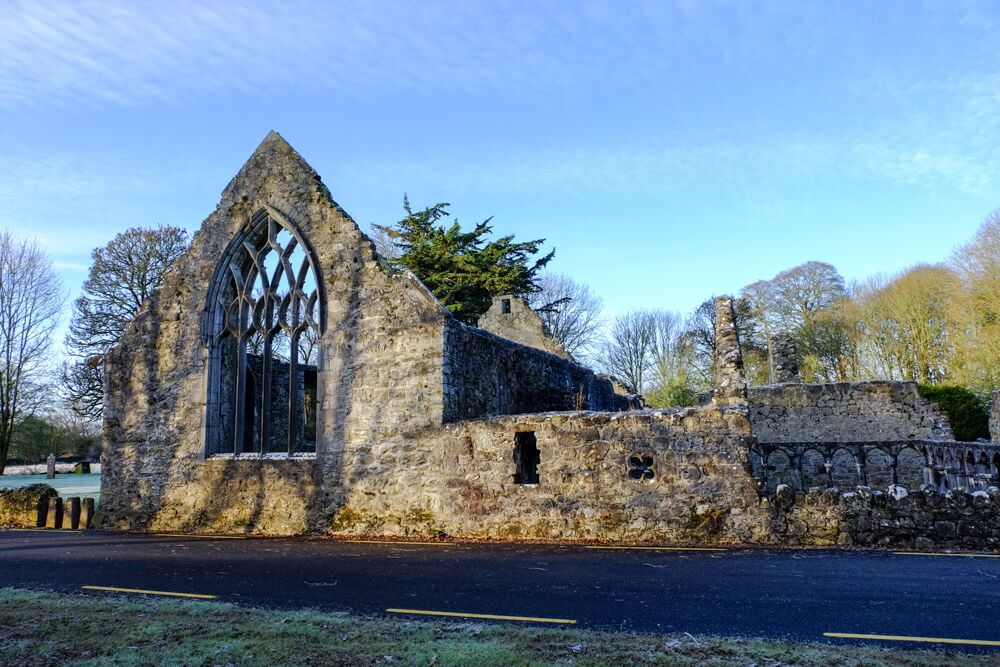 Portumna Priory is located quite close to Portumna Castle, Portumna, on the west bank of the Shannon River in County Galway. Originally possessed by the Clan Madden, the area was ruled by the Burkes of Clanricard after a Burke-Madden marriage in the 16th century. 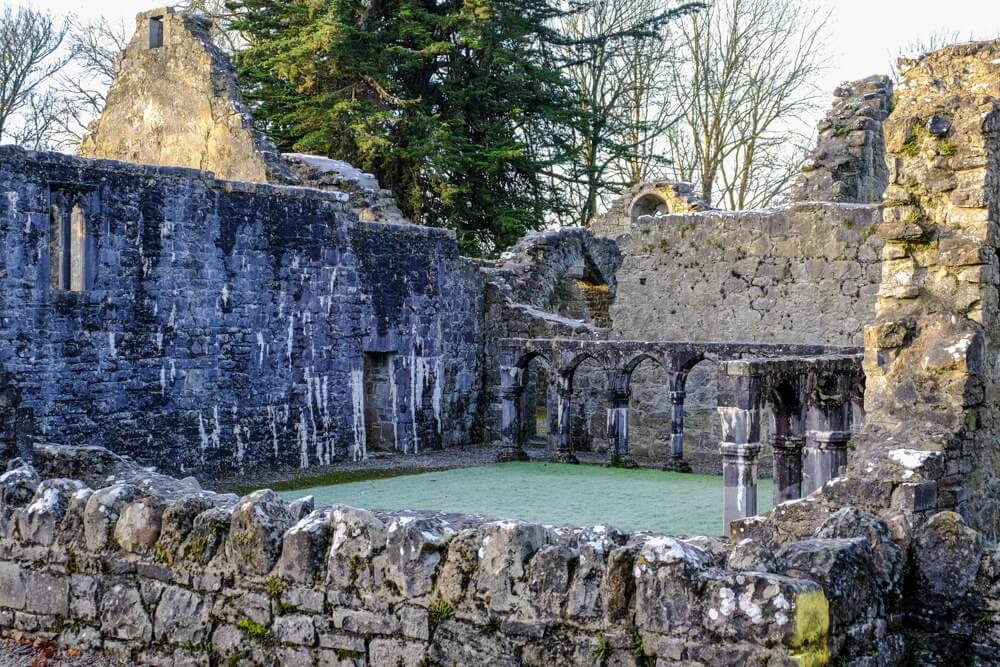 Suppressed during the Reformation it enjoyed a revival in the 17th century under the patronage of the Earls of Clanricarde before being finally abandoned in 1712. The Priory was used as a Protestant Church in 1762 until the completion of the existing church in 1832. The ruins are now a national monument and are in very good condition. It was the site of the marriage in December 1689 between Lady Honor Burke of Portumna and Patrick Sarsfield, Earl of Lucan.

The Priory was used as a Protestant church around 1760. The Priory contains the tomb of the Earl of Clanicarde and his wife. The remains consist of a church with nave, chancel and transepts, a cloister and domestic buildings. 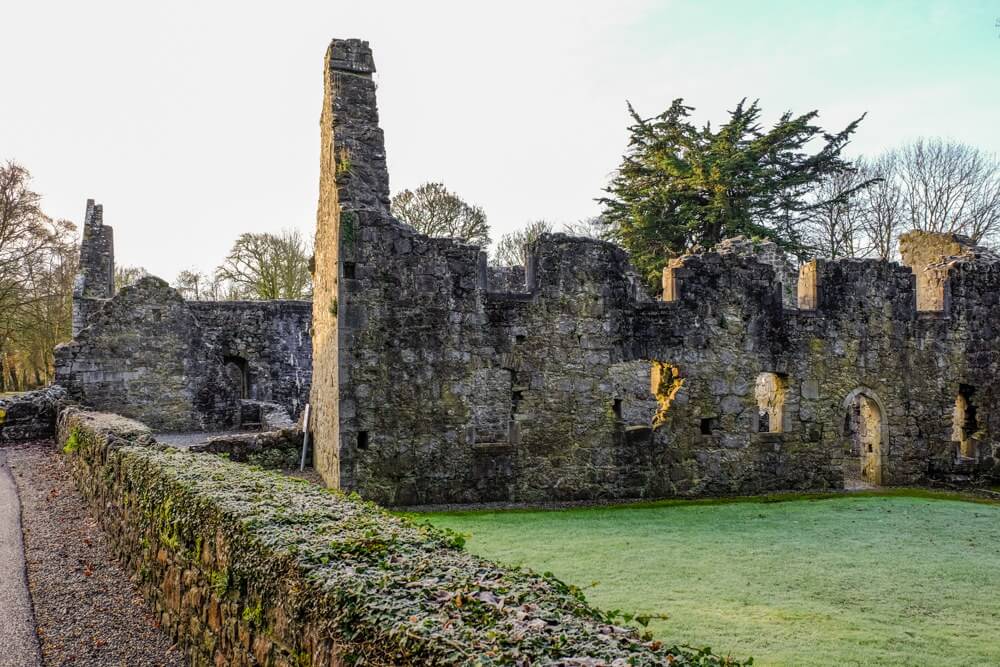 “Outside the old ruined castle of Clan Rickard which lies south west of the village of Portumna is built a tunnel. People say that when Ireland was convulsed by a struggle with the Danes, the monks – who then had a monastery about 300 hundred yards away – used to hide their gold in this tunnel. The tunnel leads to a field beside the Shannon owned by a man called Elliot


When the Danes were found to be coming, the monks used to hide the gold in it and leave the tunnel by Elliot’s field beside the Shannon and take to the boats moored nearby to escape. The Danes were very fond of gold and on this account the monks built the tunnel to store their gold.


A land agent for Viscount Harewood named Moran and a couple of workmen on the Harewood estate opened the mouth of the tunnel; they went in some little distance with a lighted candle. After a while the candle quenched which proved there was no air therein. All the party saw a large dog which is supposed to guard the treasure, night and day, and it is believed will not allow anyone to touch it, so they fled in terror.


The Lord Abbots name was O’Madden and to him belonged the priceless treasure hidden in the tunnel. He was replaced by a man named McEgan, one of the McEgan’s from Ballymcegan in Munster. A big black wolf is said to have guarded the tunnel. The value of the treasure is unknown.


Hearing the story a man by the name of O’Toole decided to unearth it – being half way in the tunnel he was eaten by the big black wolf.


Some years after, another man by the name of Ryan made up his mind to explore the tunnel. This time with success, he emerged from the tunnel with a handful of precious jewels which weighed 3lbs.


The treasure is believed to be buried in the old castle now hidden from sight under the earth, in Silk’s Wood (called after the man who planted it) believed to be in a tunnel in chests consisting of precious stones and silver chalices, hidden in a smaller tunnel running into a larger one going to Stoneyisland.


While others believe The Danes to have taken the sacred vessels and thrown into the River Shannon.

Most inscriptions at the Abbey tend to begin c.1760 or the following decade. These markers were erected by peo­ple of means. For the vast majority of the population their graves were marked perhaps by rough stones, or not at all. A good reason for people to care for what does exist.

Note: in this article, text in italics indicates exact renderings of the inscriptions. Normal text gives the relevant data in a more economical form. All but two, possibly three tombstones, in this priory were transcribed.

“Erected by his son Thomas Whelan.”

“Erected by their son, Patt Burke.”
“Eternal life o lord give unto the soul of Owen Kelly who departed this life 1780 age 81 yrs. Erected by Timothy Kelly.”
“Erected by John Clarke in memory of his beloved wife Catherine Clarke alias McGennis ..…”

“Here lies the body of Edmund Hearne of Tir Ehanandel Lisdavill his wife and the rest of that family God be mer­ciful to them Amen 1688.”
“This monument was raised by Thomas Higgison for his parents Valentine Higgision and Mary Higgison & their posterity forever 1688 Pray for them.”
“Here lies the body of Dermot Meagher of Cloncrogin who dyed the 27 day of April 1681.”
“To the memory of Allen McDonagh Esq., of Willmont House who departed this life July 1825 two of his children Thomas & Anne also lie beneath this tomb.”


Transcribed by Adrian Martyn, who was born in Galway in 1975. His main area of interest in Irish genealogy is that of Galway families, particularly on the Tribes of Galway, of whom he is a descendant. He is the author of The Tribes of Galway (2001) and many published articles. Under the pseudonym Fergananim, he has written several dozen articles on Wikipedia.